Our library buildings are closed until further notice. Thanks for your support and patience as we continue to evaluate and adjust our operations due to COVID-19. While our buildings are closed, we’re still here for you with online resources, virtual events, and a new no contact pickup service. Read more 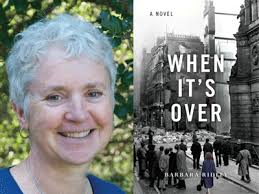 When It’s Over is a literary novel set in Europe during World War II. Coming of age in Prague in the turbulent 1930’s, Lena Kulkova meets Otto, a refugee from Hitler’s Germany, and follows him to Paris to work for the Republican side in the Spanish Civil War. As the war in Spain ends and a far greater war engulfs the continent, Lena gets stuck in Paris with no news from her Jewish family, including her beloved baby sister, left behind in Nazi-occupied Czechoslovakia. Otto, meanwhile, has fled to England, and is staying in a small Sussex village, sponsored by the eccentric Lady of the Manor. He urges Lena to join him, but she cannot obtain visa.

When Lena and Otto are finally reunited in England, they face anti-refugee sentiment and wartime deprivations, and their relationship becomes strained. Lena plunges into a new romance, and the progressive political movement that leads to the landslide defeat of Churchill in the 1945 election. But she’s desperate for news from her mother and sister.

When It’s Over deals with universal themes of optimism versus pessimism, hope and denial, and the assimilation of immigrants during a time of social upheaval. Although it is a work of fiction, it is based on Barbara’s late mother’s experience as a refugee in the 1940’s.

Barbara was inspired to write the novel after her mother’s death in 2002. There was so much in her story that was too good to lose, but so many details Barbara realized she didn’t know. So as a lover of fiction, she decided to write a novel and make up stuff to fill in the gaps.

But she also did a ton of research. Among other resources, she was able to read her father’s contemporary letters to one of his close friends. The novel offers fascinating insights into some little-known aspects of life during the war, and the history of the progressive political movements in the 30s and 40s. The issues they struggled with then still have resonance today.